I realise that 45 is not considered a ‘big’ birthday by many but as I tell anyone that will listen – I’m now officially half way to 90.  It is a sobering thought that with my health levels and the average life expectancy for males it is its unlikely that I will make 90 which in reality means that I am most definitely middle aged.

Do I feel middle aged?

In some ways yes – I feel it in my knees, in my back and definitely in my hairline – but in my head I’m still in my 20s – yes I have a whole extra 20 years of experience behind me but I still laugh at the most stupid things, get drunk with my mates and dress in much the same way as I did then.

So what makes me middle aged?

I know that anyone under 40 will say that age is really just a number. I was one of those people. I work with a great group of twentysomethings and I guess the levels of insecurity these people feel isn’t the same for me. Yes I have the “but Im old” thoughts occassionally but I often watch beautiful, healthy, lovely people doubting themselves and it makes me sad – but it also reminds me a little of me then.

In my twenties I moved around a lot, I wasn’t sure of my career and had a large transient group of friends. In my 40s I have a home, a husband and a career. (I also had a midlife crisis and now own an ice cream van but thats a different story) I also have a much smaller group of friends, all of whom are geographically remote. These are people who have seen me through the good and bad times and all of whom mean the world to me.

Whats the best things about being Middle Aged?

So there it is – 45, and there were no lightning bolts, I don’t feel hugely different but I do know that Im going to do my damnedest to make the next 45 years count as much as the first lot have.

Thanks for listening to my little mid life (hungover) ramble xx 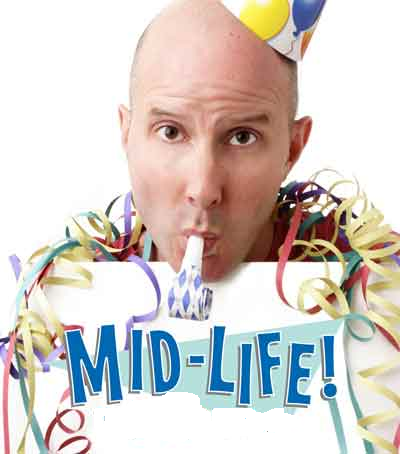