Ok so where do I begin this week? There is just sooo much to work with!!

The big news of the week has to be the death of Mrs T. and whilst there is a lot of irreverent humour going round this one has to be my favourite ->

And before you say it, I know she did a lot for the UK but she also did a lot of bad!!

Of course the Thatcher funnies didn’t end there….

The weirdest was that panic was caused among Cher fans after the hash tag #nowthatchersdead started trending on Twitter! For the record Cher is not dead!!

Rumour also circulated about Cameron’s letter of condolence which people joked started…
“I regret to inform you that due to recent events, you now have too many bedrooms…”

So what else has tickled my funny bone this week? 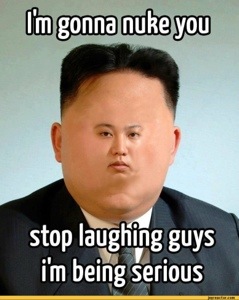 I’ve already posted my favourite Kim Jong Un joke on Monday but there has been a veritable cornucopia of gaggage on t’internet this week about him. Two more that tickled me are…

Lastly the other ‘big’ news this week is that size does matter…. Yes women are just as much size queens as gay men when it comes to their partners schlong and whilst this isn’t a joke it is funny!!