Today is a very special day in our office.

We are holding our first coffee morning in aid of Macmillan Cancer Research and im very excited. We decorated the office last evening and I then went home to commence baking.

After several requests I made my infamous Chocolate fudge cake but I also wanted to try something new and something which reflected the very multicultural nature of our business.  However its the end of the month and funds are tight so I began my journey by rooting through the freezer to get some inspiration.

I found a bag of cherries at the back of the freezer and with a little help from Google, I found a recipe for a Hungarian Sour Cherry Cake. Not only was this multicultural (I’m British, the recipe was found on an American site and its Hungarian) but its a tray bake so will feed loads AND it used up stuff I have in my freezer – All the wins!!

According to the original recipe sour cherries grow abundantly in Hungary and this cake is typically served with coffee for breakfast which makes it perfect for our coffee morning tomorrow!!

I made 3 substitutions to the original recipe, which calls for…

So here we go –  My almost Hungarian cherry cake

Toss the cherries with 2 tbs flour in a bowl and set aside.

Grease a 30cm x 45 shallow baking sheet with butter and line with baking parchment (greasing the parchment too).

In your Kenwood (or any standmixer or  kitchenaid if you are lucky enough to own one) beat together butter, sugar, amaretti, and vanilla  on medium speed until pale and fluffy. Add egg; beat until fully mixed.

Next In the bowl of your scales (saves on washing up) measure out and combine your flour, baking powder and salt.

With the mixer running on low add your flour and milk alternating between each until you have a rich creamy cake mix (the sort you used to lick the spoon of when you were little) .

Transfer this mix to your baking sheet and spread evenly. Next pop your cherries (sorry couldn’t resist) evenly over the top. 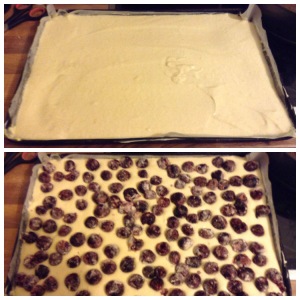 Bake until the traybake is golden brown, which only took 30 mins in my oven – if you used wholemeal i think this would take longer.. Let it cool fully then cut into squares. 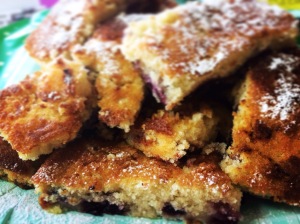