I remember much more about day 2.  You get monitored throughout the night and pain relief is initially given intravenously and then about 6am you start to come round a little more. About 8am you get your first injection (a course of which you need to self administer for 2 weeks after the operation. I’m needle-phobic so delayed doing this myself although everyone else got stuck in. Shortly after we got our first cup of tea which was absolutely amazing.

I spent the morning getting to know my surgery buddies a bit more.  I had been chatting to Candie for a while before surgery and Met Julie on the day of surgery but we were all a little out of it on day one so kept to ourselves.  Day 2 was much more fun, we started to share how we were doing and laughing about the farting!!

We were encouraged to get up and have a shower and Ill be honest I couldn’t wait to get out of the gown and changed into my shorts and t-shirt. It was great to wash and all we had to do was have the shower on our back and then wash our front rather than shower it. there is a ladies loo and shower on the ward and a gents just outside. As the only gent I had this one to myself. 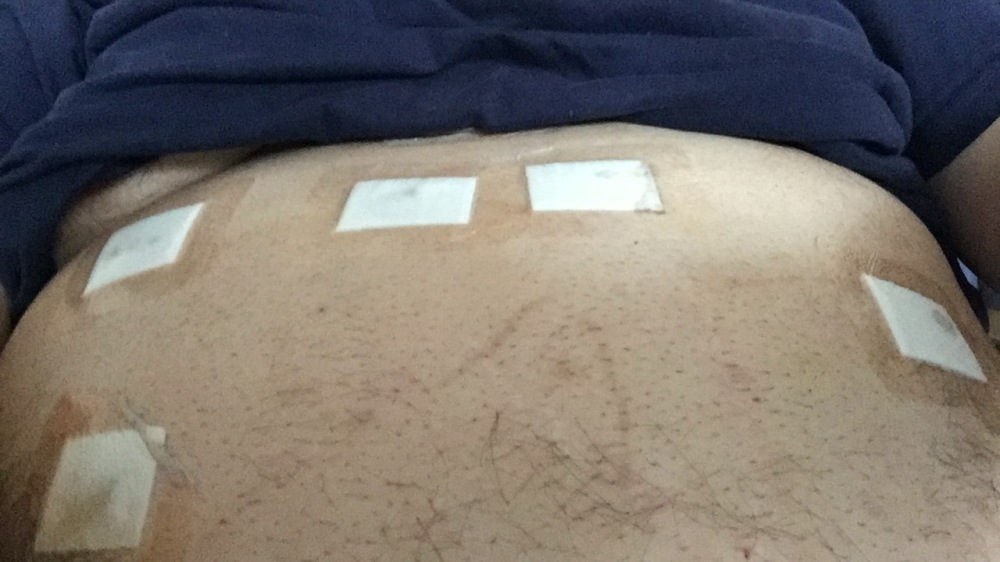 There is a 6th dressing but its under my t-shirt!!  As you can see it doesn’t look like much for having your stomach re-rooted.

Our surgeon (the wonderful Mr Hawking) came round mid morning with a member of the bariatric team and confirmed that my surgery had gone really well and that I had actually had an undiagnosed Hiatus Hernia repaired at the same time – 2 4 1 anyone? Mr Hawking answered any questions I had and generally checked on how I was doing.

Later on I started to get organised. Hubby had plugged in my CPAP machine but I needed to charge my devices – i got a cool plug that can take 3 USB leads so covered my iPad, Iphone and wireless headphones all using only one socket you have 2 sockets you can use so this was great. TOP TIP HERE – make sure you have either long leads or an extension lead as its hard to get to the plugs after surgery as they are behind your bed with lots of stuff in the way.

Lunch was the first time any of us had eaten since the op. It was a simply broth and Jelly and we were told to eat as much as we felt comfortable doing. I was able to manage it all – which has been my story ever since.

We spent the afternoon and evening getting to know each other more. Its no surprise that we were all foodies and so we started to share ideas and fears and it really was great to meet people that understand why we did this. Both also had amazing senses of humour which made life a lot more fun. We dubbed ourselves the Aldwick Massive and spent the day commenting on who would poo first (me) and speculating who exactly was behind the door at the end of our ward.  We reckoned it was a skinny ward – and they were syphoning fat off us and into them!!

By evening we were treated to a three course meal….

I had chicken casserole, mash and broccoli – just a tiny amount but it did give us something in our tummies and guidance on how much we should be eating going forward. Same rules as before we were to eat as much as we felt comfortable with, and for me that was all of it.

later on we were treated to a snack – a tbs of yogurt and some pureed fruit and 30 minutes later a coffee, after which we all started to relax and unwind prior to going to sleep. We all agreed we were going to demand oromorph before bed but all ended up passing out long before the nurses did their rounds.

I realise that everyone is different but its not as bad as I was expecting. You have 6 very small scars and you are given pain relief as you need it. the scars do hurt but its not searing pain.

you do get trapped wind. Again everyone is different and I think I was incredibly lucky as the gas passed without huge amounts of pain – lots of discomfort and LOTS of windipops but I was expecting far worse.