One of the best things about working in the centre of Brighton is the number of food options available for Lunch.

My Favourite past time on a Friday is heading 5 minutes from the office and sampling the wondrous fare provided by the vendors at Brighton’s very own Street Food Market – Street Diner . I’ve sampled a cornucopia of deliciousness including out of this world burgers, thanks to The Trolls Pantry, delicious bakes courtesy of  Honeycomb Cakes and Marvellous Meze from  Sultans Delights to name but a few.

Today’s treat was courtesy of Crocus Paella – who offer two types of Paella (this week was seafood or chicken)  amongst other treats. Crocus use Greek Saffron (it comes from Kozani) which they believe is one of the best varieties in the world.  I loved the fact that you could actually buy the safron there too!

I’ve not sampled Paella as streetfood before as I make my own at home and I’m a bit of Gemini in terms of wanting meat and Seafood in my paella  which most places don’t offer.  Today however I am hungover, having started my birthday celebrations unexpectedly early last night, and have had a craving all morning for Paella. All of my mates went to a local pub, which would have been the logical choice as the weather was a little hit or miss but I bucked the trend and marched the 5 minutes to Street Diner with Paella on my mind!!

I got there to find, unbelievably no queue (usually there’s a big on at the Crocus stall) and opted for the seafood paella.  Now at £6.50 for a large portion (£4 for a small portion) I did have a panic as I’m a skinflint at heart but I needn’t have worried.  The portion size was huge – more than enough to satisfy this flabulous blogger !! 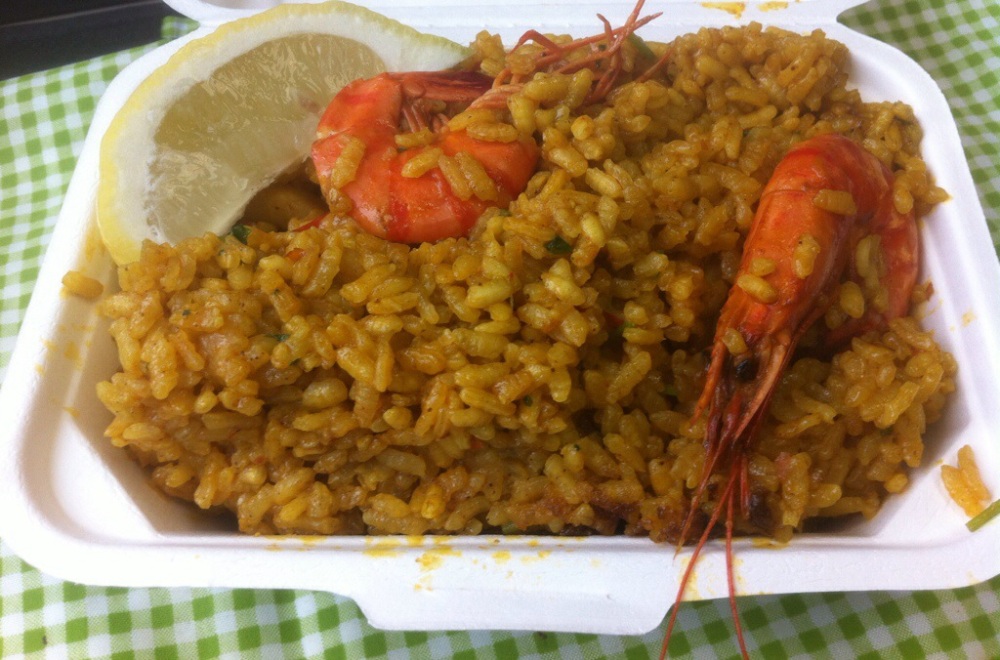 More than portion size however, the paella, which is made in huge pans on the stall, had a great mix of seafood and rice and was beautifully seasoned.  The rice was satisfyingly sticky and the seafood, despite me not arriving till half way through service, was fresh and not dried out.  The squid rings in particular were good – not tough or chewy – and the meal was completed with a large wedge of lemon – which no Paella is complete without.

They did have chicken paella on offer (for £5.50 large and £3.50 small) but I didn’t have the nerve to ask for a mix of both (ill definitely try this next time as the chicken Paella looked REALLY good too – I’m just a sucker for seafood. as mentioned before they also sell different herbs and saffron’s and a range of saffron based teas. On their site they even sell a paella starter set, including a pan, so you can take inspiration home and make your own.

Overall this was a great lunch and what’s more they even have loyalty cards where if you get 9 stamps you get a freebie!!  I am completely sated as I sit here typing and am already looking forward to next Friday – look out Crocus I’m gonna ask you to mix it up!!