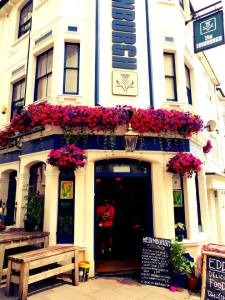 I know, I know, I’m still being too quiet on the blog front as we are just so darned busy but I had to share a review of the wonderful lunch we had at the Eddy (The Edinburgh Pub) in Brighton.

I should preface this by saying this was an informal works lunch and we were attracted not just to the proximity of said venue but also to its 2-4-1 lunch deal which made even the most extravagant of options a mere £6!!

As I was expecting a large dinner I didn’t want too much for my lunch and so opted for the meat platter at £8 (so £4 for me). I justified this because lets face it, it was slices of meat, a few olives and a couple of lettuce leaves served with some bread.

How wrong could I be!!

Obviously the main event of a meat platter is going to be meat, and we are talking lots of meat here!! The chorizo was thickly sliced and beautiful tasting. It didn’t feel like it had been taken straight from the fridge and was accompanied by gorgeously garlicky salami, which was lightly peppered and made a great contrast to both the chorizo and the generous portion of parma Ham, which was the last of the meats on offer.

The platter also arrived with a huge bowl of mixed olives. we aren’t just talking green and black here but a real mix of sizes, types and tastes, from tiny black olives that burst in your mouth to large meaty affairs all served in beautifully flavoured olive oil and herbs.

The platter was complimented with a sliced ciabatta roll and butter and some salad. The salad was probably the only thing that let the dish down. Lots of different leaves, probably too much onion and some diced mixed peppers. It was great with the meats but was crying out either for some dressing, or even cherry tomatoes to moisten things up a little. 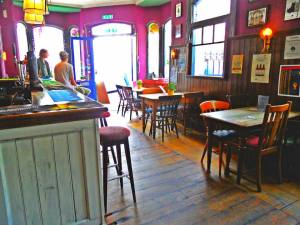 Overall this was a wonderful lunch in great surroundings – which left me over full (always a good thing) so much so that I actually shared my olives around. Anyone who knows me knows I dont share!! The other food round the table left me with lunch envy, with a great mix of meat and veggie options everyone found something they liked.

The menu had great variety with a daily specials board. From the modestly priced sandwiches to Steak or Veggie mousakka to Nofish and chips (think battered halloumi) there really was something for everyone. Some of the burgers and fajitas that arrived looked amazing and the Nachos, which are homemade using flour tortillas looked astounding.

One word of praise/warning – the portion sizes are HUGE. with many of the team who ordered small portions ending up not being able to finish.